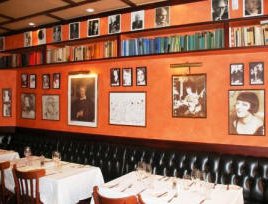 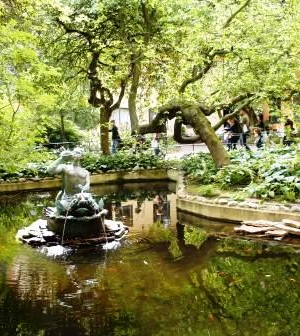 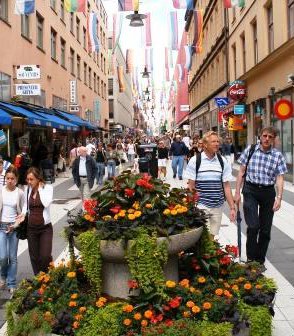 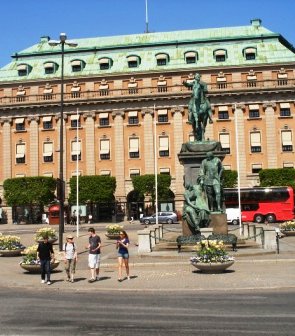 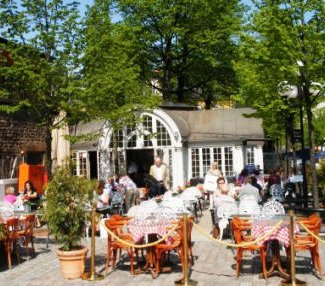 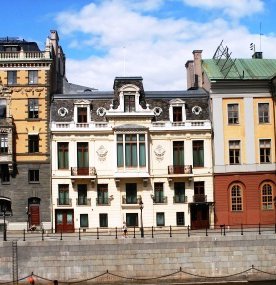 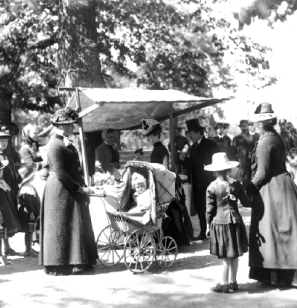 Being able to walk for over an hour inside a city centre without disturbance from noisy traffic (except peripherally) must be rather unusual. But Stockholm can offer this. The surroundings may not be green throughout but the walk is still enjoyable. Our route follows Stockholm’s pedestrian streets, lined by cosy cafés and pubs, and it runs through some of Stockholm’s finest parks.

We start at Observatorielunden (copse), which we reach via the underground station Rådmansgatan, exit Handelshögskolan. To our right the Town Library rises up behind Stockholm’s largest paddling pool and up on the brow of the Brunkeberg ridge sits the Observatory. It was built in the 1750s for astronomical research purposes and today houses an Observatory Museum. The Brunkeberg ridge has indirectly given the names to the districts to the north and south of Gamla Stan. They were named Södermalm, Norrmalm and Östermalm after this sandy gravel ridge, the word “malm” meaning gravel ground. In former times the ridge was much higher than it is today, a large part of it having been excavated over the years. Since time immemorial there has been a road along the top of the ridge carrying important traffic northwards out of town. Today the Malmskillnadsgatan runs up here, separating Norrmalm and Östermalm.

The Old University of Stockholm

Around the Observatory hill are grouped many fine buildings which made up the University of Stockholm between the 1870s and 1970s. We stroll down the ridge and come out onto Drottninggatan, where some of the old institutions of the University had their premises. In the Spökslottet (Ghost Castle) a little further down the street the University secretariat was housed and the students could enjoy a moment’s relaxation over a cup of coffee in the Spökparken. The Spökslottet, a private palace built in the 17th century, takes its name from a mean old foundry proprietor who lived here once and is said to haunt the palace and its garden.

The 17th century was also the era during which Stockholm became the symbol of the new Great Power of Sweden. Stockholm expanded out onto the malms and a grid town plan was drawn up for Norrmalm, with Drottninggatan as the central thoroughfare through the new district. Norrmalm was soon populated and in the 18th century the centre of town moved here and many stately palaces and institutions were built.

Two great demolition projects have ravaged Norrmalm, the first one at the end of the 19th century, when a large part of the old 18th century town disappeared, the second in the middle of the 20th century, when all the remaining slum areas were cleared to make way for a totally new and modern town centre. Drottninggatan, like most other streets, was hit hard by the demolition, but if you lift your eyes above the tempting restaurants and boutiques, there are still many beautifully renovated facades from centuries past to delight in.

In the blue tower of No 85, Drottninggatan the author and playwright August Strindberg lived between 1908-1912. Today his home is a museum and in the very paving of the street you are reminded of the author. Well-known quotes from his works can be found here, decoratively embedded, mosaic style, in a verbal ribbon running along the middle of the street. Many handsome houses line Drottninggatan, among others Westman Palace and Hårleman House with a delightful inner yard, a calming oasis with outdoor restaurants, paddling pool and sculptures. The Central Baths, in genuine Art Nouveau style, borders on this garden as well.

Soon we will reach the crossing with Kungsgatan and after that Drottninggatan turns into a regular shopping street with modern, rather dull façades, only to change character again as we approach Gamla Stan, when it is once more lined with older buildings. Today Drottninggatan is a central thoroughfare, much as it was in the 17th century. It is always very busy, with people milling around in the car-free street, keen on shopping and the café culture.

As we are nearing Norrström the street is lined with grand old bank palaces, built around the turn of the last century, when faith in the future of banking was strong. Today several state departments have moved into the one-time banks. Down by the quayside, facing Gamla Stan, lies Rosenbad, which houses the Government Secretariat, and the Hereditary Prince’s palace from the 18th century which houses the Foreign Ministry. We turn into Gustav Adolfs Torg (Square), the absolute centre point of Stockholm, and admire the Opera House, then pass by Saint Jakob’s Church and cut across to the Kungsträdgården.

If we had come here in the Middle Ages we would have been met by a sturdy wall with heavy iron gates which would have shut us off from the royal gardens which then lay here. In the beginning this was purely a vegetable garden for the palace kitchen, providing the royal family and courtiers with vegetables and fruit. Later it became more of a pleasure park. Foreign trees and herbs were planted in the park, and fountains delighted the visitors.

Not until the 18th century were the general public allowed into Kungsträdgården. Many of the songs by the 18th century troubadour Carl Michael Bellman depict in lively, almost impressionistic fashion, people amusing themselves in the park in those days. Some of our kings have had their statues erected in the park, and today we still find Karl XII in the southern part, with Karl XIII at the northern end. Slanderous tongues say here is a lion surrounded by urns and an urn surrounded by lions. (The Swedish for urn, “kruka”, is also another word for coward!) Between the two statues, and right in the middle of the park, Molin’s Fountain was placed in 1873. A work of art in bronze, it forms a very decorative feature of the park.

The centre of restaurant life in Stockholm

If we turn into Näckströmsgatan, we will reach another park, as this street ends in Berzelii Park, a little gem with a big pleasure palace. Here are the Berns’ Salons, which have played a great part in Stockholm’s entertainment life through the years, putting on fabulous musical shows and varieties. Our walk continues northwards across Norrmalmstorg to Biblioteksgatan which ends in Stureplan. Here we can look at the work of art called “the billowing wall”, which symbolises the little brook which connected Brunnsviken and Nybroviken in times gone by. A bit further north was also once a sizeable lake, Träsket (The Marsh or Fen), which covered large parts of Östermalm. Today the lake is drained, the brook is filled up and Stureplan has become one of the most popular meeting places in town with “The Mushroom”, a giant concrete umbrella, in the middle providing excellent shelter from the rain.

Here, restaurants abound, tempting you with good food in pleasant surroundings. If Stureplan is a popular meeting spot, then Sturegallerian comes a good second. With its many designer boutiques it has become Stockholm’s most stylish shopping temple. Here is also the distinguished Sturebadet from 1885 in a gorgeous olde worlde setting, as well as several restaurants and bars. Out through the other end of the galleria we are presented with more shopping opportunities in the Grev Turegatan and in summer the restaurants sprawl out into the car-free street.

If we turn off westwards, walking along the Humlegårdsgatan we will come to Humlegården with the Royal Library, a monumental building from the 1870s. Just as Kungsträdgården did once supply the royal household with groceries, so, too, did Humlegården have a similar purpose. In the 17th century a garden was laid out here where fruit, spices and “humle” (hops) were grown for the royals. Gradually, this garden too became more of a public park. Many different tree species were planted and in the 19th century the park got its present layout, footpaths winding along between the lawns and under the tree canopies.

In the springtime Humlegården shows its prettiest side, when hundreds of thousands of bulbous plants are in bloom on the lawns and in the flowerbeds, and all of Flora’s Hill is blue with scilla. Humlegården has had a chequered past: it once had a Tivoli (funfair), a zoo, merry-go-rounds, open air dance floors and inns, and in the Rotunda, a little pavillion originally built for Queen Ulrika Eleonora in the 17th century, theatre performances were held.

We now cut across Humlegården, turn into Stenbocksgatan and reach Eriksbergsparken. With the grandiose building belonging to the Order of Carpenters (“Timmermansorden”), Eriksbergsparken, consisting of a wide terrace with a fountain in its middle, surrounded by beautiful flowerbeds, looks very much the palace garden. This is in stark contrast to the purpose of the place in times gone by: up until 1857 punishments were meted out here in public on the Träsktorget, the erstwhile name of the place.

We continue past Borgarskolan towards Jarlaparken, which was laid out in the 1930s. Here is a fine marble pond and a statue of Ellen Key, a pioneer feminist writer in the 19th century, among the flowers and shading trees.

From here Rehnsgatan leads us back to Observatoriekullen, which is where our tour began. 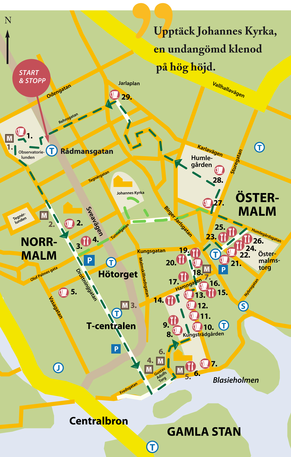 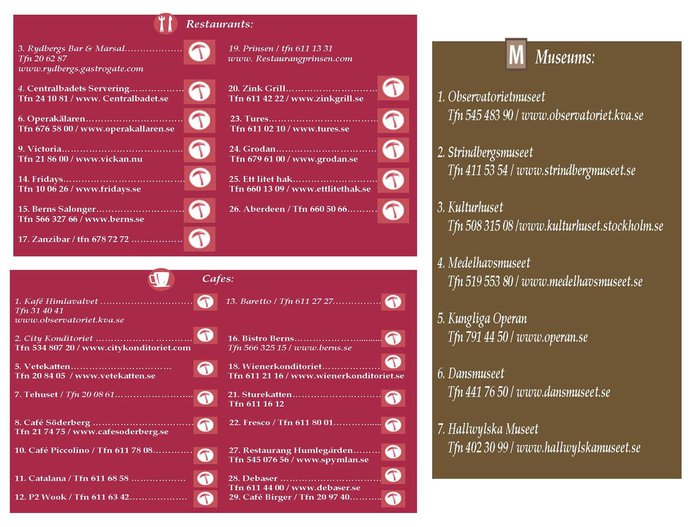 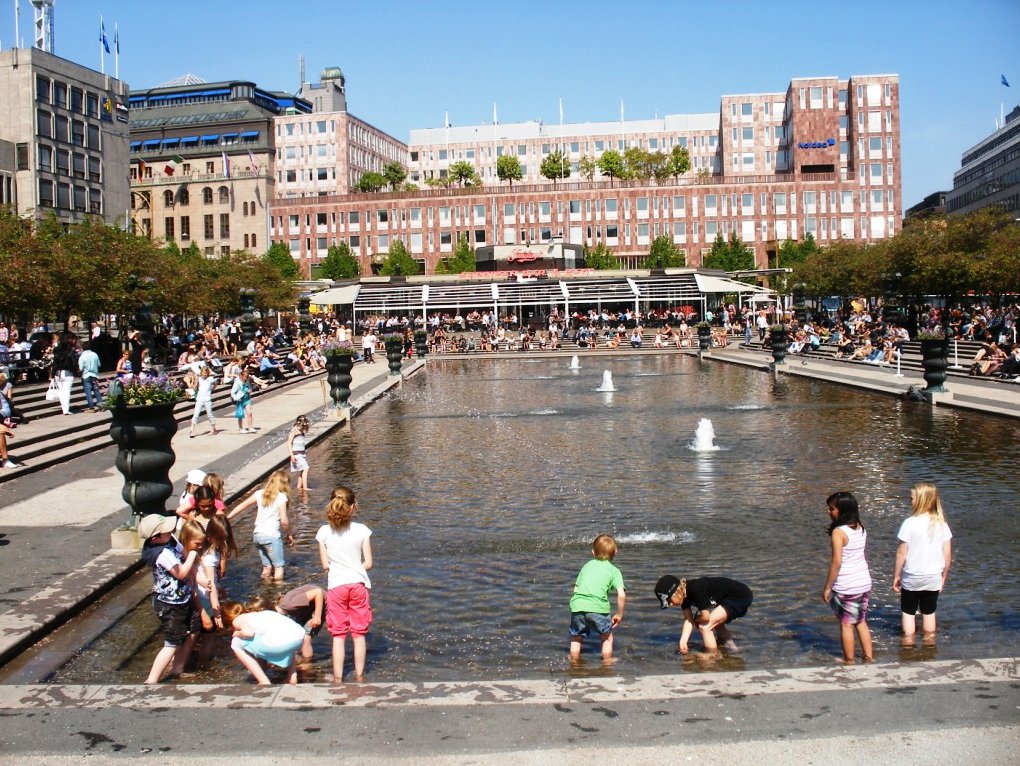 Enjoy a Beef Rydberg in a stimulating author environment

Relax in a cooling garden

The shopping and pedestrian mall, Drottninggatan 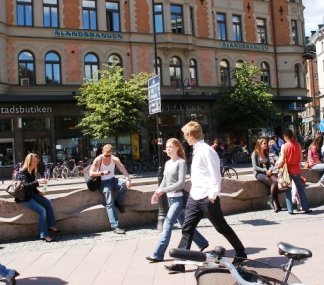 The Primeminister's home in a dream position

Café Söderberg in an idyllic setting in Kungsträdgården