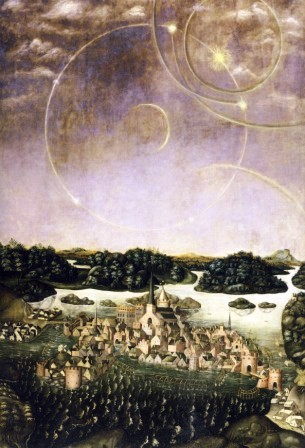 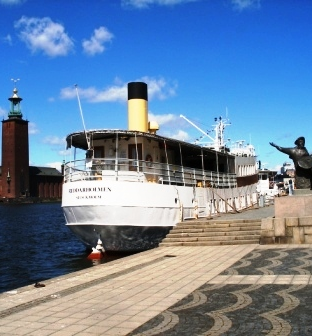 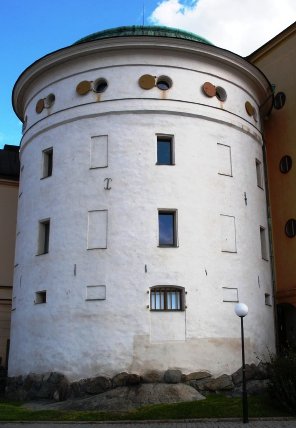 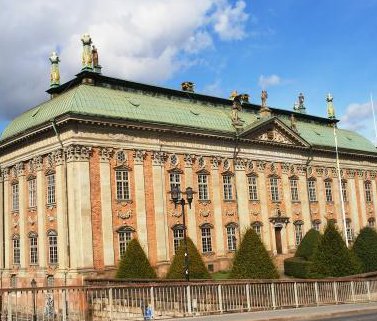 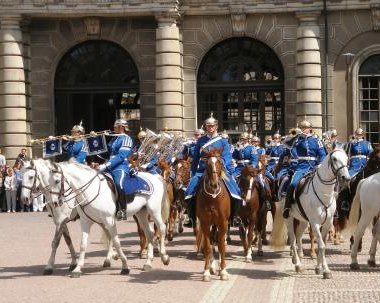 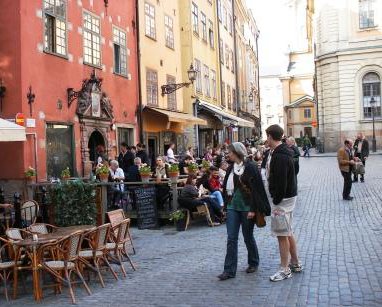 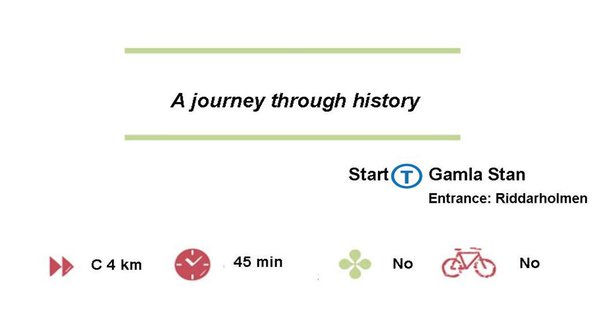 One thousand years ago the site of Gamla Stan was just an islet, the Stock Islet, much like any other island in the lake Mälaren except for its strategic position.

As the land surface rose over the years, some of the sea routes into the Mälaren were cut off and, apart from the navigable channel at Södertälje, only the Stock Sound at the Stockholme remained. The rich and fertile Mälaren valley attracted enemy invaders from across the Baltic Sea. The valley was in need of protection and so a watchtower and stockade were erected at the north-eastern end of the Stockholme. This helped the defence not only of the Mälaren valley but also of the islet itself, which with time became more built-up.

Nobody knows exactly when the town of Stockholm was founded. According to a document from 1420, it may have been in 1187, or it may have been in 1252, when the town was mentioned for the first time in a letter from King Valdemar to his father Birger Jarl. There was certainly frantic activity on the island of Stockholmen during this latter period and Birger Jarl played a big part in it all. The defence mechanisms were strengthened both in the water and up on the watchtower. A town wall was built with several towers added and soon this became a castle, the Tre Kronor (Three Crowns).

Stockholm’s growth at this time was caused by German trade expansion in the Baltic area, which resulted in a trade treaty between Lübeck and Birger Jarl in 1251. Soon Stockholm was more German than Swedish and the German influence has left its mark: the very town plan is a copy of that of Lübeck. Church, town hall and main square were placed in exactly the same pattern in Stockholm as in Lübeck, surrounded by streets and alleyways.

The first buildings were concentrated around Stortorget (The Main Square) and were defended by an encircling wooden wall, but in the 15th century the town had grown beyond these limits, so the wooden wall was replaced by two stone walls down by the waterline. New ports were constructed, capable of coping with the increasing trade across the Baltic, and Stockholm slowly developed into the most important commercial city in the area, due to its strategic situation between the Mälaren and the Saltsjön (Salt Sea).

From Bergslagen, further north and inland, came iron, tar and copper to be reloaded and transported south on the Hanseatic League cogs, and among other things imported from Germany was that desirable commodity, salt. Stockholm grew and flourished. The lowly wooden houses, a serious fire hazard, were gradually replaced by grander houses built in stone, and in the 17th century a new town plan was approved after a widespread fire had ravaged the town. It is now that Gamla Stan as we know it took shape.

The nobility were attracted to Stockholm and built themselves stately mansions on the Stads-, Riddar- and Blasie-Islets, as well as on Norrmalm, thus giving Stockholm a totally new face, fit for a capital city during the era of Great Power.

A walk through the medieval stone city

Let us take a walk through the streets and alleyways of Gamla Stan. We may assume that not much has happened here for the last 300-400 years. But that’s not strictly true of course. Underground a good deal of modernisation has taken place over the centuries and we now have water, sewers, electricity and broadband. The infrastructure has certainly improved. Medieval Stockholm was not a very sanitary place in which to live, with its stinking sewage running down towards the water and pigs and poultry walking around rooting and pecking everywhere. We might spare a thought for the medieval citizens as we walk dry-shod through the alleys and look up at the beautifully renovated facades.

From the Gamla Stan underground station we walk westward through a tunnel under a bypass and some railway tracks and reach Riddarfjärden (The Knights’ Bay). Here awaits a grand view over the heights of the South (of Stockholm), and of the Riddarholmen and Norr Mälarstrand.

We turn off to the north and have a good look at Riddarholmen, a little island, almost forgotten today, as it lies cut off by the awful Central Bridge. But a visit to Riddarholmen is worthwhile. In the Middle Ages the island was called Gråmunkeholmen (Grey Monks’ Holme) after a Franciscan monastery which was founded here in the 13th century. The Riddarholmen Church stems from the same period and has been used as a royal burial- and ceremonial place ever since.

Another old landmark is the Birger Jarl’s Tower, built under King Gustav Vasa’s reign on the north-western side of the island as part of the town’s defences. Around Birger Jarl’s Square many splendid 17th century palaces are grouped together, residential manor houses for the higher aristocracy in those days, now occupied by various state departments.

The first house we see on our walk is the Hebbeska Huset (Hebbe’s House), which is connected to the old parliament building. Then we walk past the Sparre Palace, which retains much of its 17th century character, and the Kammarrätten (the administrative Court of Appeal) in pseudo-antique style.

At the quayside a yacht is moored, once the property of Barbara Hutton, now a hotel and restaurant. Further in stands the Wrangel Palace with its two round towers, parading in all its glory on an elevated ledge. Back in the 17th century this was Stockholm’s largest palace, owned by General Gustav Wrangel. We pass the old Auction Rooms, skirt around Birger Jarl’s Tower and cut in through a gateway to take the steps up to Birger Jarl’s Square, where it lies encircled by old 17th century palaces, competing with each other in splendour. Many prominent Swedes have lived here, amongst others the Councillor of the Realm, Fredrik Stenbock, the Governor Schering Rosenhane, the architect Carl Gustav Tessin and Councillor of the Realm, Erik Sparre, to name but a few.

Do have a look inside the Riddarholmen Church and study the crypts where Swedish royalty are buried. Almost all our kings, queens, princes and princesses pass in review and it feels like walking through the pages of a school history book.

After crossing the Riddarholmen Bridge we can admire the beautiful Riddarhuset (House of the Nobility) from all sides if we go down to the Riddarhus quay. And from here we have a marvellous view over to the Parliament on the Helgeandsholmen (Holy Spirit Holme) around which we walk along the Norrström and Stallkanalen.

From Helgeandsholmen, with Norrström as a decorative front, we get the finest view over the three palaces Rosenbad, Sager Palace and Arvsfurstens (Hereditary Prince) Palace. We cross the Norrbro (North Bridge) as you would cross a street and come down to the Strömparterren where the Carl Milles statue of the Sun Singer greets the sunrise in the east. From here you can see, not only the sunrise, but also the Opera House, the magnificent houses on the Blasieholmen and all the archipelago ships moored along the Ström quay.

If we turn around we see the entrance to the Medieval Museum to our right. It stretches in underground below the Riksplan (Square of the Realm) and exhibits interesting finds and excavations from the Middle Ages.

Our walk continues along the Stallkanalen, and across the canal the Royal Palace makes an impression on top of the Lejonbacken (Lion Hill). If we are lucky we may even get to see the changing of the guard as they parade on the Outer Palace Yard, once we have climbed the stairs up to the Terrace of the Main Guard. Here Storkyrkan, the Stockholm Cathedral, rises up in front of us, beckoning us in for a visit. The oldest known picture of Stockholm, the Vädersolstavlan, is kept inside the cathedral and gives us an idea of what the town looked like in the 16th century. Here you will also find the medieval wooden sculpture group “St Göran (George) and the Dragon”, which symbolises the victory over the Danes at the battle of Brunkeberg in 1471.

Now we turn into Österlånggatan, and then follow Västerlånggatan, both of which streets used to run just outside the old medieval wooden town wall. Västerlånggatan was then the most important thoroughfare between the provinces of Södermanland and Uppland. Today, as in the Middle Ages, these two streets are lively shopping areas, but obviously with different wares on offer. Art galleries, handicraft shops and fashion boutiques are now sharing this space, where earlier ships’ chandlers, cobblers, tailors, butchers etc plied their trade.

Inns were of course dotted about the place, then as now, and today there are countless restaurants in Gamla Stan. Do raise your gaze now and then above the tempting shop windows to admire the old house façades, which all bear witness to the past. The black cramp irons which hold the different parts of the buildings together can tell us the age of the masonry, and various decorations around front doors and windows give an indication as to the function of the house.

The heart of Gamla Stan

From Västerlånggatan we turn right into the Tyska Brinken (The German Hill), pass by the Tyska Kyrkan (Church), and soon reach the Brända Tomten (The Burnt-Out Site!), a dear little square with beautiful houses and greenery. From here we go straight into Köpmangatan (Merchant Street), the most significant shopping street of the Middle Ages, which takes us up to Stortorget, the core of Gamla Stan and also its power centre.

In this square the Town Hall once stood, from which Germans and Swedes together ruled the capital. Step into this square, Stockholm’s oldest, and lift your eyes towards the handsome medieval houses on its western side, which compete with each other in beauty. Then dive down into the dark Kåkbrinken, one of the many alleyways in Gamla Stan, all of them with a story to tell. The story of Kåkbrinken is not very uplifting though: down by the water there once stood a simple wooden construction, a “kåk”, with a pillory on top of its roof, where law breakers were forced to stand in shame, iron ring around their neck, and get flogged or even beheaded.

Here ends our walk, and if we have done nothing wrong we will fear no pillory and should be able to make our way unscathed down to the underground station. 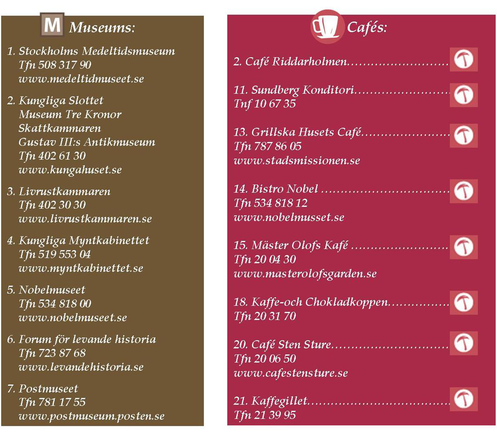 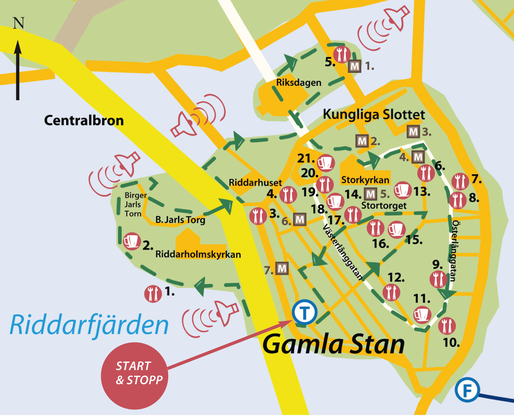 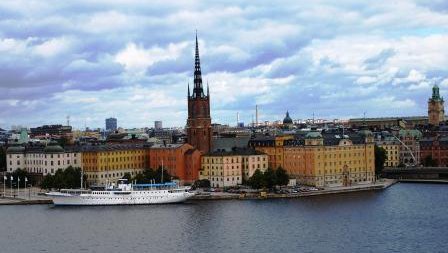 Fascinating weather phenomenon over Stockholm in 1535

Fine views over the Knight´s Bay and the City Hall

The Tower of Birjer Jarl

The House of the Nobility

Changing of the guard on the Outer Palace Yard 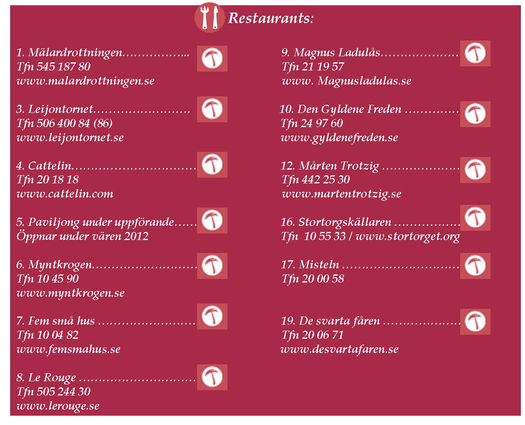 The open-air cafés have their hands full