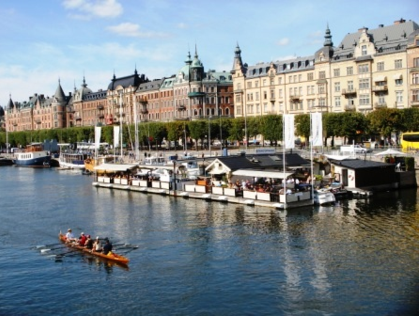 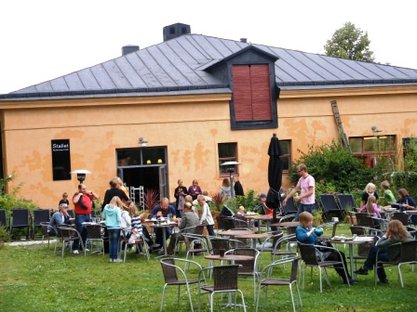 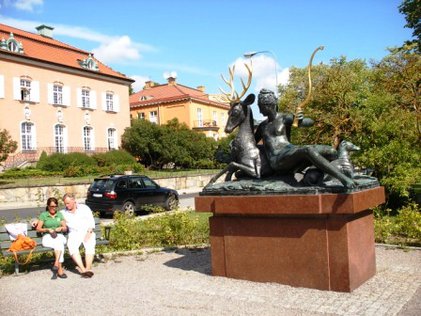 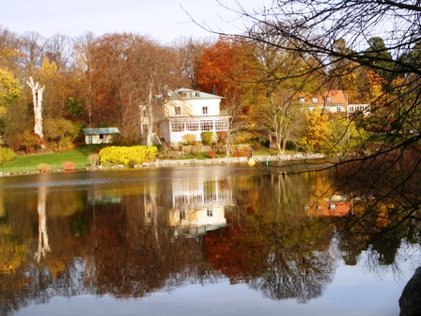 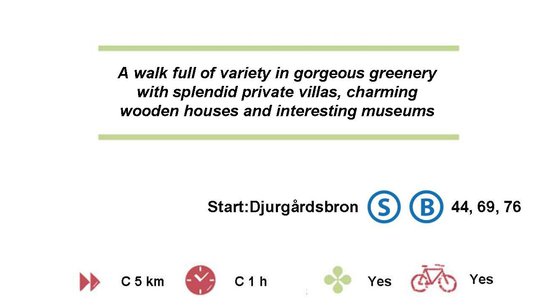 The Djurgårdsbron (bridge), where our walk begins, is not just another bridge. It is a work of art in its own right, opened in 1897 for the Art and Industry Exhibition which sprawled out along the Djurgårdsbrunnsviken (bay) and all over the Lejonslätten (Lion Plain).

Four magnificent statues depicting our ancient pagan gods, Tor, Freya, Heimdal and Frigga, adorn the four corners of the bridge. At the south side of the bridge we turn off left, passing through the Blue Gate and soon arrive at Carl Eldh’s statue of the poet and troubadour Gunnar Wennerberg. The first luxury villa along our route once belonged to a Mr. Wikander, a cork manufacturer.

A little further on lie the two inns, Godthem and Ulla Winbladh. The latter is a remnant from the exhibition of 1897, as is the Scanian Great Industry Pavillion a little further along the way. On closer examination, it will be seen that the pavillion has a gaudy façade of various patterns in brick and tile, and behind the walls used to be a replica of a mine with a lift and a deep mountain shaft – a public relations ploy put together by the Scanian Industrial companies of the day.

Across the road out on the Framnäs Point and the Love Point we can feast our eyes on two beautiful sculptures. The singer Jenny Lind poses in crinoline finery on the former and a loving couple are skilfully rendered in the bronze sculpture, “Idyll”, on the latter site. Two more houses worthy of our attention are lined up along the way: the green Fjeldstuen from the 1830s and the brown Sirishof from the 1760s. All in all, this side of the bay forms a very pleasant walk with luxuriant, shading greenery and open pastures.

As we reach the Djurgårdsbrunns Bridge we see the old Apothecary’s House, a relic from the spa era and beside it a dull barrack-like building, which was put in place of the lovely original inn after it burnt down in the 1980s. Here along the sunny side of the bay we first see a number of nice old villas. Three of these, all of them from the 19th century, are worth a mention: the Green Strandvilla, like a delicious piece of gateau and originally a public swim baths house, and the Bergshyddan in the Empire style which has had many famous tenants, including Ingrid Bergman. Far out on a cape lies Villa Lido, originally built for the countess Charlotte Piper.

We have now arrived at the museum area. No fewer than five museums crowd together in this little patch. First we come to the Ethnographic Museum, then the Technical Museum, the Police Museum, the National Museum of Sport and Athletics and the Museum of Naval History. This last one wins the prize for architectural beauty. A masterpiece by Ragnar Östberg, this concave white building stretches its arms westwards in a welcoming gesture. Right by the museum stands the robust “Seaman”, looking out over the bay as a memorial of those who perished at sea during World War II. Another house which has succumbed to fire along the bay is Källhagens Värdshus (Inn), again replaced by a dull modern building. Mercifully, a red wooden house has been left standing in the middle of all the grey concrete, a reminder of the restaurant trade, which has been thriving out here for several hundred years.

From Källhagen we have a fine view over to the Diplomat City and the stately Nordic Museum across the bay. Behind the Diplomat City the Anglican Church tower rises above the posh villas, nearly all of them built around 1910 or just after. They stand in a row along the Nobel Street, displaying a homogeneous architecture in red brick. Originally they were intended as private villas, but today they house various embassies and consulates. The reclining Diana, goddess of hunting, poses with a hind and a bow and arrow in a beautiful sculpture group down by the water’s edge in front of the villas.

A little further along lies the Nobel Park, so named because he had a dynamite factory in the vicinity and there were once plans to build a Nobel Institute here. Nothing came of these plans, but there was an Institute of Forestry here in the 19th century, which experimented in planting trees out on the cape. The main forestry building is still standing, as is a large collection of native Swedish trees. Do go into the park and test your knowledge of biology! In fact, all of Djurgården is full of trees, the dominant variety being the old oak. Here we have the largest range of oaks in all of Northern Europe, something to feast your eyes on during a walk through the green tranquillity that is Djurgården! 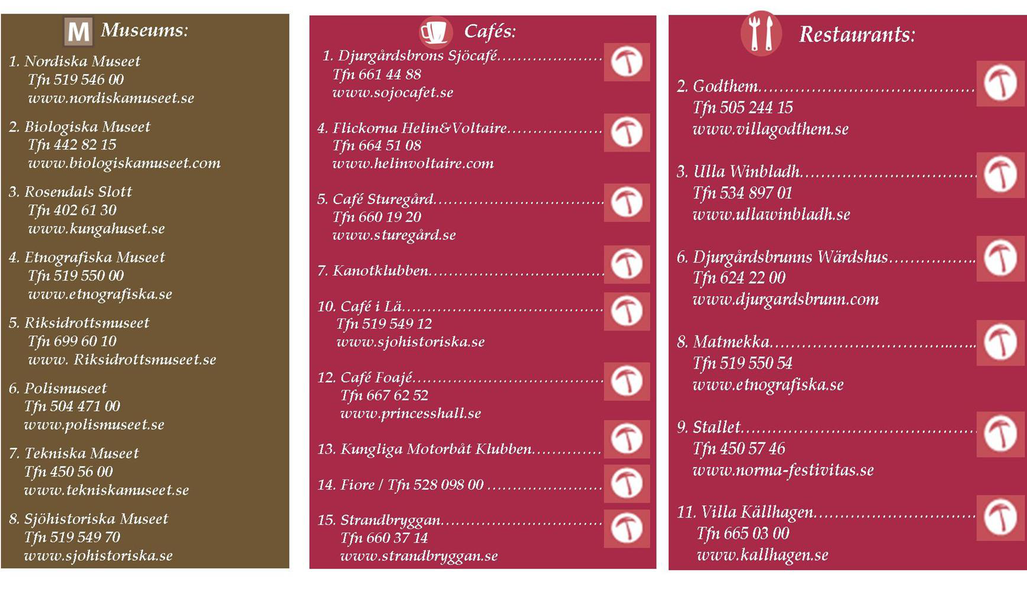 Strandbryggan in the best of settings at Strandvägen

The museums offer not only culture

The reclining Diana in a serene environment

Villa Lido is decoratively reflected in the waters of Djurgårdsbrunnsviken