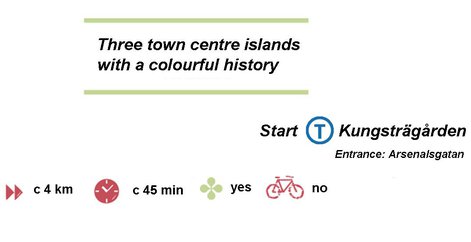 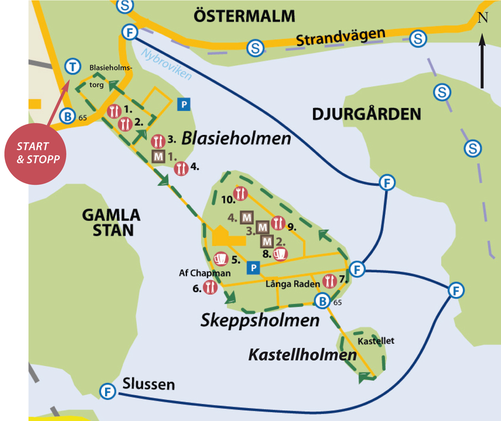 From a true idyll in the Middle Ages with grazing cows and sheep and fertile soil, the islands became the scene of noisy shipbuilding in the 16th century, which lasted until the 20th century. Towards the later part of the 20th century it regained some of the calm medieval atmosphere, but with a rather different character.

The first names given to these islets were Vångsön, Notholmen or Lustholmen, according to their changing characters. Vång is an old Swedish word for field and since there was such fine grazing land on Skeppsholmen, its first name was Vångsön. Later on, the sons of King Gustav Vasa built a pleasure palace here, and soon people started calling it Lustholmen. At Kastellholmen they used to fish herring and smelt with a seine net (not), hence the name Notholmen. Maybe it is now time to rename Skeppsholmen Kulturholmen. They certainly haven’t built ships here for a long time! But let us go back to the 17th century when the island truly lived up to its name.

A Naval Force is born

When the navy moved to Skeppsholmen in the 1640s the fleet was already one hundred years old. In the beginning it was not much to write home about and could easily be moored, in its entirety, down by the jetty below the Royal Palace. It consisted then of a number of Hanseatic ships which Gustav Vasa had bought from Lübeck, strengthened and armed with cannons.

As time went on, the enterprise expanded and the navy was moved over to Blasieholmen, where a church and a house for the Admiralty were built, and the necessary shipyards were set up. Eventually the space grew inadequate and the activity ever more disturbing and noisy. Queen Christina felt so bothered by the disorder across the water she had the shipyards moved to the eastern side of Skeppsholmen. Here there was plenty of room and a bridge was built over to the island, followed by the Admiralty House, a drying house for cordage, a crane, rope yard and other facilities. Out at Kastellholmen a huge mast crane was positioned and high up on the hill an octagonal wooden citadel with cannon holes was built to guard it all. Up here the three-tongued naval flag still flutters, marking the times for hoisting and lowering flag for the benefit of the ships lying at anchor out on the Strömmen.

The navy’s first spell on the island was short lived. After only forty years the whole business was moved to Karlskrona, as this was more ice-free and nearer to the arch-enemy, Denmark. But in 1715 things were hotting up again. Wars and menacing neighbouring countries made it necessary to build a new fleet of galleons in Stockholm. Galleons were once more built at Skeppsholmen and the shipyard area spread out across the water all the way over to Djurgården. Such buildings as were already on the island were now reconstructed and extended, and more buildings were added gradually.

The functions of the different buildings changed over the years. The ropeyard, to take one example, has also been a stable for the horses of Karl XII:s bodyguard and ammunition- and tackle shed as well as lion- and tiger accommodation! Now the East Asia Museum resides here.

Most of the houses on the islands were built between the 17th and 19th centuries and especially at the beginning of the 19th century many new buildings were added, mostly the creations of the architect, Fredrik Blom. The Admiralty, the Skeppsholmen Church, the Drill House, the Boatswain Barracks and the new citadel, to name but a few, are all done after his blueprint. 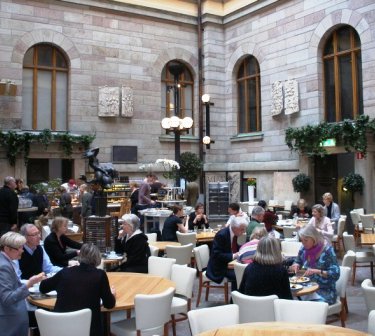 Culture takes root on the islands

For a good three centuries the Navy inhabited these islands which were more or less closed to the public for large periods of that time. The fleet’s move to Muskö in 1969 paved the way for a great change of character in the island. Suddenly many fine old buildings stood empty in splendid surroundings, practically in the middle of town. What to do with them? There were early, hare-brained schemes to demolish the whole lot, to level the ground and to connect the islands with a view to building high-rise blocks of flats here, but these plans were thankfully rejected. Instead the old houses have been lovingly renovated and with time given new purpose.

It is safe to say that culture has taken root on these islands. On Blasieholmen, for instance, lies the National Museum, and Skeppsholmen can boast no fewer than three museums: the Museum of Modern Art, the Museum of Architecture and the aforementioned East Asia Museum. Other old houses are now used by the Konsthögskolan (College of Art), Folkhögskolan (Public College) and various other institutions for research and education.

A good starting point for a lovely walk around the three islets is to take the underground to the Kungsträdgården station and then walk down towards the Blasieholmen quay. We walk past the Grand Hotel and the National Museum and admire the steamships, a hundred years old, that lie moored along the quayside, waiting for tourists eager to explore the Stockholm archipelago. We then walk across the “new” Skeppsholmen iron bridge, which replaced the old wooden bridge in 1862.

We stop for a while on the bridge to drink in the marvellous views all around us. Straight ahead lies the Admiralty, flanked by the Skeppsholmen church and the Main Guard on the left hand side, with the old full-rigged vessel “Af Chapman” to the right. Behind the ship we catch a glimpse of the heights of the South (Södermalm), and the Skeppsbron in Gamla Stan shows its most attractive side, viewed from this spot. We walk on towards “Af Chapman”, which nowadays is used as a youth hostel, and carry on walking along the quayside towards Kastellholmen. On the way there we pass the College of Art and the Naval College, both of them handsome buildings from the latter part of the 19th century. 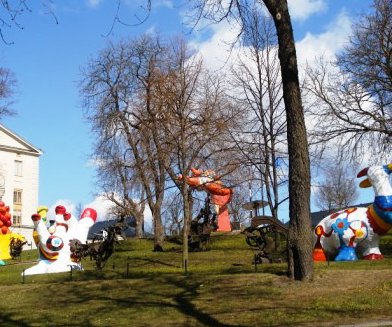 On the other side of the Kastellholmen bridge stands a skating pavilion, used by King Oscar II as changing rooms and club premises in connection with skating jaunts on the frozen water of Nybroviken.

We toil up the Kastellholmen hill and soon find ourselves in front of the citadel up on the very top. The new building was erected in 1845 after an explosion in the dynamite store that was housed in the old citadel. From this vantage point we have a grand view over to Djurgården with Beckholmen and Gröna Lund the main eye-catchers.

We stroll down the hill on the other side of the citadel and arrive down by the coal shed. This was built in connection with the transition of the fleet from sail- to steam power at the middle of the 19th century, when a need for a sizeable coal storehouse arose. Close by, the brig "Three Crowns" lies moored here at the quay. We round the point and walk past a few old residences which served as accommodation for naval employees and also as a hospital and an inn.

Intriguing ships that stimulate the imagination

After the bridge we turn right and a bit further on we can just about glimpse the houses, commonly known as The Long Row, originally built for the soldiers of Karl XII:s personal guard. But the men were out at war when the building of these houses was completed, so they were instead put to use as hospital and alms houses.

We have almost reached the Eastern Bridge Embankment along which lie moored, today as in former times, a good many ships. It is easy to imagine the noisy hustle and bustle here in the olden days, when the shipyard industry was in full swing! Today the place is calmer and you can feast your eyes on the ships from all over the world lying anchored here now, helpfully displaying signs which describe their chequered history.

If we cast an eye up towards the island before rounding the point we’ll see the Museum of Modern Art. From its fine restaurant terrace you are able to take in a splendid view, spanning from Strandvägen with its beautiful fin-de-siècle houses over to Djurgården with its treasures: the Nordic Museum, Astrid Lindgren’s Junibacken and the Vasa Museum. 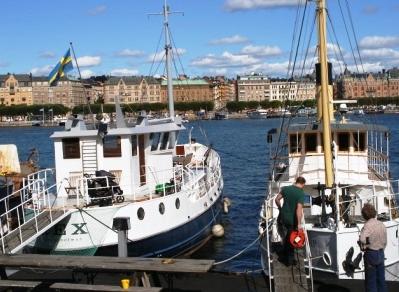 On the way back to the underground station we turn in behind the National Museum and cut across the Museum Park to the Blasieholmsgatan. Here, and all along the quays of Blasieholmen are a few palace-like houses which were originally built as early as the 17th century. At the beginning of this century, Stockholm’s population grew considerably and people had go in search of habitation on Söder-, Norr- and Östermalm. In those days these were not considered desirable locations, but famous noble families were actively encouraged to settle along the shores facing Gamla Stan in order to improve the reputation of the “malms”. And they couldn’t have found a more desirable location. Very soon beautiful palaces cast their reflections in the water and aristocratic families such as Fersen, Douglas and Bååt moved into their stately homes on Blasieholmen.

During the next few centuries rich townsmen followed suit and now there are several grand houses to admire on this islet. Exceptionally alluring is the vista of Blasieholms torg. Arguably Stockholm’s most beautiful square it is framed by the Bååt Palace, the Fersen Palace and the Foreign Ministry. At either side of this square stand two decorative bronze horses, replicas of the 2000 year old horses from Constantinople that are now to be found on the Piazza San Marco in Venice.

If you position yourself in the south-western corner of the square (and avoid looking at the house behind you!) you could easily believe yourself standing in a square in southern Europe.

The underground station is now around the corner to the left and the walk has reached its end. 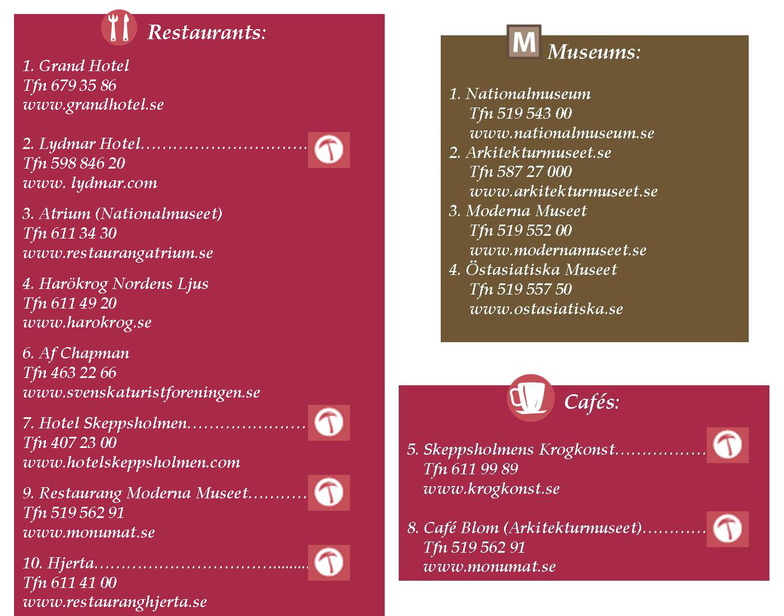 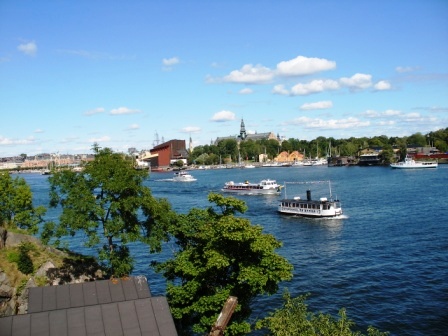 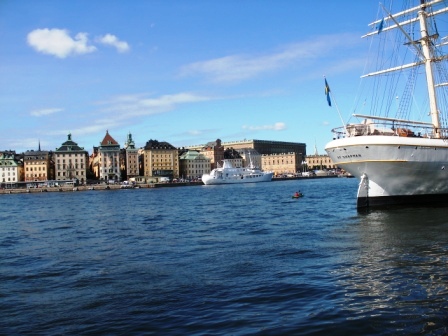 Ships from all over the world stimulate the imagination